Steam Library Retrospective: And Yet It Moves

The Game: And Yet It Moves

Description: Another indie game (this will probably be a common theme), And Yet It Moves is a puzzle platform with a paper aesthetic whose primary conceit is that you can control the orientation of the world. Rotate the world 90 degrees to either reach the next area or tumble to your death, though often both. Use this power to also affect the environment to solve puzzles and advance throughout the world. 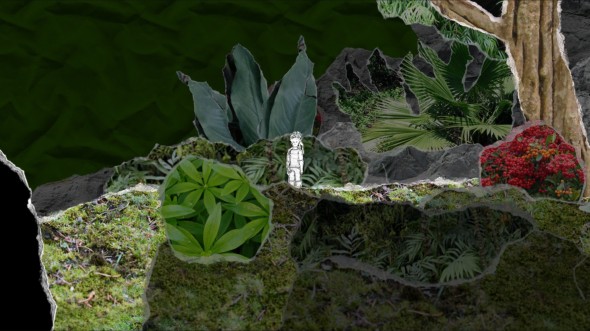 Previous Experience: I previously played the first chapter, but have forgotten basically everything about it except the core gameplay mechanics. Despite this, I continued onto the next chapter. I acquired this in one of the very first Humble Bundles.

My Experience: You may notice that this game is not Amnesia, which is actually the next game in my queue alphabetically. That is because I physically cannot play Amnesia. I have pretty bad anxiety in general, and games like Amnesia just amp that up to 11 and make it nearly impossible for me to do anything. I tried to play it and promptly quit. I decided that I could either follow my original rules and never progress in this series ever again or cheat and actually get some writing done. I decided on the latter.

Unfortunately, this next game is, while not bad, incredibly boring. And Yet It Moves is an older indie game released in the wake of Braid[1], and it was part of the craze of indie sidescrollers with artsy aesthetics. It got a lot of acclaim at the time, but it is really hard to see why now.

It is not that the game is especially bad in any area, but it is also not impressive anywhere either. The paper craft style looks neat but not exciting. It is all texture, but none of the pieces come together in a way that truly feels awe-inspiring or gripping. It does not help that the colors of the world are pretty uniform, at least in the levels I played. The second chapter is a jungle chapter, and it is dominated by light and dark greens with occasional browns thrown in. There has to be something in these levels that give a sense of progression and difference from moment to moment (or at least level to level), and aesthetically there is little growth or progression.

In a similar way, the audio is disappointing. The problem with the music is there is not much of it even if what there is sounds enticing. It feels like you are constantly in the transition between great tracks, but those tracks never actually come. There is ambiance, but it is not too long before that ambiance repeats and exposes its artificial roots.

The game plays much like it looks and sounds (if anything, this game is tonally consistent). There is real potential here, though the idea is not particularly unique, but what is there is not exactly engaging either. Every puzzle adventure game needs to strike a healthy balance between strategy, figuring out a puzzle, and skill, executing the solution. Most games in this genre lean too heavily on skill over strategy, which makes puzzles really unsatisfying. Puzzles should take a lot of brainwork beforehand, but if that solution is really difficult to do, it feels more frustrating than satisfying. On the other hand, if players can mess with the system and brunt force through puzzles with simple tricks, it feels like the player is missing the experience and also not having a great time. Players should be able to progress once they figure out a puzzle and not a moment before or after that.

In And Yet It Moves, I found myself often figuring out a puzzle and then spending five more minutes trying to execute the fairly simple solution. The way the physics and momentum in this game worked felt natural but also annoying. Yes I understand that switching gravity around on a wooden swing will make it swing rapidly, but I am still annoyed when it comes out of nowhere to squish me and make me go back to the checkpoint. I do not feel clever when I solve these puzzles; just relieved that I do not have to go back to do them.

Kind of like with Adventures of Shuggy, I can definitely understand why people like this game, but the notion that this is anyone’s favorite game or that anyone beyond the developers have any passion for this game is somewhat ludicrous to me.

[1] I am really looking forward to revisiting this one.