The Game: Adventures of Shuggy

Description: You play a vampire-esque person-thing who has to explore a relative’s castle/house place that is probably haunted. In reality, though, this is a small dressing over a puzzle platformer where you collect gems to get keys to unlock new places where you can get gems to get keys. 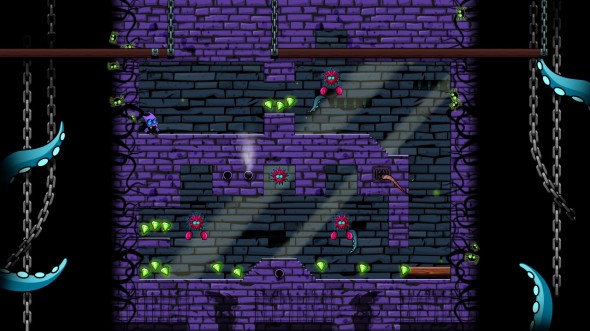 Previous Experience: Absolutely none. Pretty sure I got this in a Humble Bundle many moons ago and I have not even gone so far as downloaded it.

My Experience: My first thought upon starting up Shuggy was, “Oh this feels like a Game Maker[1] game.” This turned out not necessarily to be the case as the game was actually made with the XNA framework Microsoft released to get people interested in making Xbox Live Arcade games, but I think the idea is still the same.

That is not a critique, by the way. At least not necessarily. What I mean by that is that this is a game with an incredibly managed scope. If you have ever thought about making games, then you have probably imagined scrolling backgrounds, lots of different enemies, epic storylines, and lots of characters. And if you have ever started making a game, you quickly realized how difficult every one of those things is.

So you scale back. You compromise. You don’t need scrolling backgrounds on every level. Your game can be a series of connected single screen rooms. You take advantage of what skills you do have. Making enemies shoot bullets is tough, so you do more interesting stuff with enemy pathways. You can add some odd paths but keep the same behavior for each enemy (touch it and you die) so each enemy seems like they are different when really they are quite similar in the game’s logic.You add in a few easy particle effects for flair and boom, you have a game of sorts.

Now I am not trying to say that this is exactly how the development of Adventures of Shuggy went. I am not incredibly familiar with the studio and do not have a huge desire to do a bunch of background research on what is honestly kind of a fluffy post. Nor am I saying that any of this is necessarily a bad thing. What I am saying is that this game reminded me of my own time in Game Maker when I realized I couldn’t do any of the cool stuff, so I kept trying to make the few things I could do interesting.

Each room in Shuggy is based around a gimmick of sorts, and you can practically feel the designers thinking, “Okay, how can we make this interesting.” And in the hour that I played, I could see some ingenuity there and some clever things the game did.

This is not a review,[2] but if it were a review, I would say that the game feels fine. I can see how a lot of people enjoy this game, but I really have a hard time seeing how this is anyone’s favorite game.[3] The rooms might make you go, “Huh,” but they will not have you scratching your head the same way a puzzle in Portal might. Most rooms can be solved by just continually jumping toward the thing that looks like it should be jumped to until you figure it out, at least in the beginning, but the imprecise controls really hold it back.

But hey, if you have ever played around in game design, this game might remind you of your own creations. That’s worth something I guess. 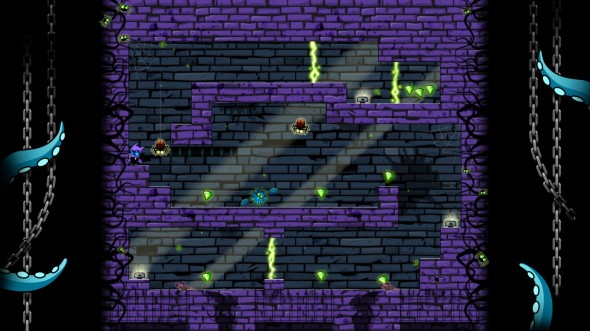 Up next: Air Forte

[1] For those unfamiliar with Game Maker, it’s a set of free tools that allows anyone to make games without needing to code. It is basically an easy way to start game design without needing to invest a lot of time and money. Most games made with this are made by beginners and usually not incredible.
[2] I’d have to play for more than an hour, and I’m not really sure I can be bothered now.
[3] If this is your favorite game and you do not have a relationship with the developers, please let me know. I’d really like to know if you exist.