Good information about dating and relationships is hard to find. Heck, finding good statistics is hard to find. It is usually so colored by agendas and rhetorical points that I have a hard time believing or trusting anyone trying to be an authority. Most dating and relationship works look a lot like this one that showed up on my newsfeed recently: 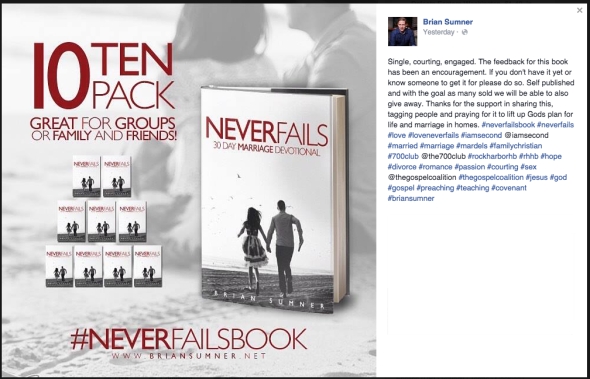 Some quick Googling led me to find that Brian Sumner, the author, is a former pro skater who divorced his wife and went through a period of spiritual soul-searching where he found Jesus* and then returned to his wife. He remarried her, raised his kids with her, and began working as a pastor, where he continues to make Jesus cool through his skateboarding and foreign accent.

Now, if it sounds like I am making fun of him… well I kind of am, but in a good-natured way because I find the idea of a skateboarding pastor so wonderfully 90s. I have no ill will toward the guy personally and it sounds like he is having a pleasant life, and that’s good for him.

But I am also willing to bet that his book, Never Fails, is not as foolproof as its title implies.

I have not actually read the 30-day devotional,** but I have listened to day 4 and read day 5, To be honest, I kind of started to nod off while listening to the former and nothing in the latter was particularly revelatory (it basically says, “you committed to this, so you’re stuck with it”). But more importantly, what this book aims to do, provide a roadmap for marriages, is a gargantuan task, and one that probably requires more than 30 days and one couple’s perspective.

For example, in chapter 13, he writes about anger and how it affected him in his marriage. He then goes from there to offer advice about anger to men. I could point out that he is focusing on men because of slight sexism inherent with Christianity, which might be fair, but I think more of it is based on him working out of what he knows and his personal life.

I’m really not trying to pick on this particularly small devotional book, but I think it represents a lot of the issues I see with dating books, Christian or not. They take bits and pieces of data, whether that be anecdotes or statistics, and use them to make definitive points about how people should live their lives. This guy went through a period of anger, this is how he dealt with it, so this is how you should deal with it.

This is not to say that I think anecdotes are entirely pointless for people. I think sharing stories is one of the strongest ways we learn and connect with people. Heck, I write for a website where that is basically our mantra. But also part of our mantra is that we recognize the limits of such an approach and don’t seek to appear to be an expert on what we talk about. We’re also just trying to figure it all out ourselves.

I think this is incredibly important when it comes to relationships. I think we have all dealt with people who act like because they are in a relationship, they can give you advice on your own relationship, and so often they just completely do not get you or understand how the world works beyond their own sphere, and that comes across in so many relationship advice books.

Which brings me to Modern Romance.

Written by comedian Aziz Ansari, Modern Romance seeks to explore the modern world of romance from a sociologist point of view. Ansari teamed up with a group of them to explore the unique challenges and quirks of modern day dating, starting with trying to understand how technology fit in and working outward from there, eventually going out to other cultures as well.

This is possibly the best relationship book I have ever read for a couple reasons, but the first one is that is takes a data-driven approach to dating. Ansari brings in a couple anecdotes from his own life, but they are usually to drive questions (“why do we do this?”) or expand upon answers rather than be a blueprint for others to follow.

Ansari wonders how dating is different now than it was 50 years ago, so he goes and asks people who dated 50 years ago. Ansari wants to figure out what dating is like in other cultures, so he goes and collects data in other cultures. Ansari wants to figure out how people text when dating, so he looks at a bunch of text messages.

It is clear that, like any good statistician, no assumptions were made. Ansari and the researchers behind this book never rely on assumptions that text messaging is ruining conversations or that people are only looking for sex nowadays, and this allows them to approach dating from a non-judgmental, analytical point of view, even when approaching hot topics.

This is key. When a book like I Kissed Dating Goodbye*** brings in statistics, it does so just enough to prove its points, but Modern Romance never falls into that pitfall. When Ansari found out that more choice does not necessarily lead to more satisfaction, he could have then concluded that modern dating is worse than dating 50 years ago, but he didn’t. Instead, he asked people how they felt. And if he had gotten the soundbite that elderly women think that young women should live their lives on their own before settling down, he could have jumped to the conclusion that modern romance is objectively better, that people are all in better situations now, but he didn’t.

Rare does this book actually give advice on how you should or should not conduct romance in the modern age. This refreshing omission allows the book to take a broader approach to romance and give all sides of it a fair portrayal. I never got the impression from reading this that Ansari was trying to impart wisdom from all his successes in relationships. Instead, he approaches it as a guy who wants to know more about this topic and looks to find out about it.

Which ironically makes this one of the best places to look for dating advice.

Here is what I have realized about relationships: they are damn complicated. Incredibly complicated. Many work for silly reasons, while others that have all the support and love in the world fall apart. Anyone who thinks they understand relationships usually only understands their own relationship and that is it, so all advice given should be taken with an unhealthy amount of salt.

Instead of prescribing advice, Ansari works to describe relationships, and this approach means that this book will probably help you understand yourself and your relationships better. Considering the huge amount of misinformation out there, Modern Romance‘s approach distinguishes it from the crowd while also offering something that might actually help you, even as it makes no attempts to tell you what to do.

*He was under the kitchen table the whole time!
**I’m not getting any revenue from this blog so I can’t write it off on my taxes, so it’s definitely not worth the money and probably not worth the time.
***Which, for the record, is not as crazy as people take it to be.

Ray Comfort, Moral Relativity, and Why His Good Intentions Aren’t Helping Anyone »
« Captain America and What Makes an American Hero