As I mentioned in a previous post, I finally got around to listening to Serial, the audiobook released as a podcast.[1]. 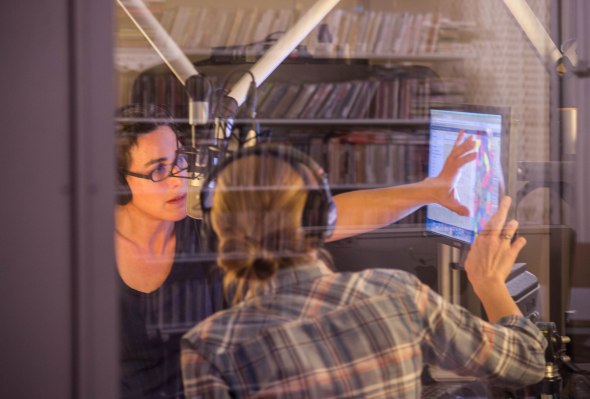 I am just spitballing here, but how about we have a murder of a young woman whose body was found buried in a local park. Let us say the primary suspect is her father, who neighbors say was controlling of his daughter and was upset when he found out she was planning on going to a college he did not approve of.

Of course, like any good crime story, this is a red herring. Partway through the story, we find out that he really loved his daughter and actually did approve of her college but was afraid he could not afford it. The yelling the neighbors heard in relation to this was actually his frustration at not being able to find a second job, which several employers could corroborate.

So this leaves the detectives[2] without a lead, but wait! A local hotel manager reports that he saw her on the night of her death, and the doting boyfriend who seemed so sad and upset was with her as well, which puts him back on the suspect list. His alibi is questioned, and some holes show up, and pretty soon we realize that he has a dark side, something no one except those closest to him, including our victim, saw.

I could go on, but I feel like this is a pretty good example of what typically happens in a crime story. Characters are introduced, their motives are questioned, and the detectives try to find evidence that corroborates or disproves their stories.

Yet despite having lot of changes and hidden sides, most of these characters are usually fairly two-dimensional. The father either cares about his daughter or doesn’t. Her best friend is either a liar or honest. The boyfriend either has a temper problem or he doesn’t, and it is up to our main characters to figure out which groups these people belong in.

But what kept me listening to Serial, what made it so I could not turn it off, was its ability to resist putting people in boxes.

Some background for those who have not listened to Serial yet (you should!): Adnan Syed was a normal high school boy when he was charged with murdering his ex-girlfriend, Haie. He has proclaimed his innocence since he was first charged in 1999. Sarah Koenig, the host, spends the season of Serial looking through the evidence trying to find out what happened that day and figure out whether Adnan was innocent or not.

One of the people frequently talked about is Jay. Jay was Adnan’s friend (though they were not close) who provided the bulk of the prosecution’s case against Adnan as both Adnan and Jay claimed they hung out on the day of Haie’s death, though Jay has a different account of the events.

What the podcast makes clear is that Jay is a liar. He frequently changes the story, sometimes to suit his advantage and sometimes seemingly just because. Some details stay consistent, like Adnan showing him Haie’s lifeless body in the trunk of her car, but where this was, what time it was, and what happened leading up to it frequently change. Koenig also goes through the cell phone records used to corroborate his story and finds that, though some of them match up, his timeline of events, and the timeline the prosecution used, are not supported.

So Jay is our bad guy. He used to be Adnan’s friend but became someone who made up the details to try and get him put in prison for some reason.

Or is he? On the episode dedicated to Jay, Koenig puts a surprisingly sympathetic light toward him. He was a good kid, maybe one who smoked weed and tried to act like a tough guy but who listened to “white” music and acted polite to the people around him. His trial for being an accessory to murder[3] was actually a bit heartbreaking. Furthermore, his story is not accurate and the details frequently change, but there are some important parts of his story that are corroborated for that Adnan cannot account for, and he had some important information, like the location of Haie’s car, that the police did not have.

In our crime story, Jay might be the main bad guy, or he might be a red herring, but rarely would a crime story leave Jay at this. Jay might have been an innocent bystander who was pressured into this situation by a crazed Adnan, or he might have had more malicious motives. He might have even been the killer. The podcast never gives us a definitive answer while at the same time giving us enough insight into Jay to realize that he does not quite fit any of these categories. You cannot just put him in a box.

Jay is probably the best example of this resisting categorization, but this podcast does this with almost every person in it. Was Adnan a victim of circumstance? Everything about his personality and what his friends said about him seemed to say so, but there were several key points of evidence that point to a different interpretation (as one person says near the end, if he is innocent, there were a lot of coincidences that day). Personally, I am convinced that at some point he was lying about who he was talking to and where he was, but at the same time, I am not sure exactly what that means or why he would do that.

Did Adnan’s lawyer intentionally botch the trial to get more money? That sounds like an interesting wrinkle in the story (the one that actually got Koenig to cover it in the first place), but the episode dedicated to her reveals something both simpler and more complicated as it delves into all the ways that she was both a brilliant and terrible lawyer.

I know there are lots of theories about the events in Serial out there, not because I have looked, but because this is the type of story that prompts discussion. It gives characters that, as an audience, we are not quite sure what to do with, so we test various approaches and methods against them to see if any stick. When it comes to crime stories, we think we want that “Aha!” moment when everything is revealed and we understand everything, but I do not think this is the case. After all, the greatest mystery of Sherlock Holmes is not any that he solves, but rather the man himself[4]. Like all good crime stories, Serial is a mystery where the greatest mystery is the characters involved. This one just so happens to make every character that mystery.

1. That is not their official tagline but the best description I can think of for it.
2. Let’s say one of them is a police aid posing as a psychic, because that is what everyone seems to do these days
3. He claimed he helped Adnan bury the body, a claim that also shifts around a bit.
4. Which is personally why I found the second series finale of Sherlock so good.