This is a Steam Machine (and why you should pay attention)

Edit: So I recently found out that there is a way to both save your password on your machine and download games while you play other games, taking off two of my complaints with the system. They were under menus I did not know existed.

I got my Steam Machine this morning, and suffice to say that I was very excited about it. My current computer was slowly becoming obsolete in terms of gaming ability and I really did not want to have to shell out a ton of money for a new console. So when I found out that I was one of the lucky 300 people to be in the Beta, I was beyond ecstatic (I did a happy dance). Now, because I am a person keen on blogging, I figured I would give my impressions of the machine so far. But first, some background.

What is a Steam Machine? 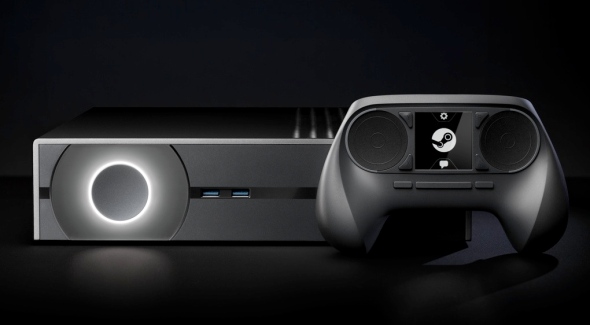 Many of my readers have no idea what I am talking about right now. That is okay. I am here to explain.

What is important to understand about video games is that while Xbox and Playstation get a ton of press, a much less publicized gaming revolution has been happening for quite some time on computers. Consoles have been becoming more like computers in many good and bad ways. You can now purchase and download games on your Xbox One or PS4 (yay) but will now have to deal with constant updating (boo). Meanwhile, PC gaming has started to shift to be more like consoles, but only in good ways. While PC gamers still have to deal with figuring out system requirements, not having physical copies of games, and poor ports, thanks to services like Steam and Good Ole Games, PC gaming has become easier and cheaper than ever before.

And in the midst of all of this, Valve has been updating their Steam client to better work on televisions, culminating in their eventual release of the Steam Machine, which is currently in beta. The Steam Machine aims to be the in-between for consoles and PC, a way for PC gamers to play their games in a more comfortable environment and a gateway drug for console gamers who want to see what the “PC master race” has been yelling about all this time.

The Steam Machine does this in a couple different ways. By releasing these PCs that look and play similarly to consoles, Valve is enticing players who would not normally scour the internet for parts and cases. However, by keeping the machine essentially a PC, filled with replaceable parts and all the ports a nerd could want, players have the option to delve further into the PC rabbit hole. It is a great approach that should please both hardcore and casual players.

So how does it fare in practice? Well, Valve makes a lot of progress but there still needs to be some work done.

Setting up the system 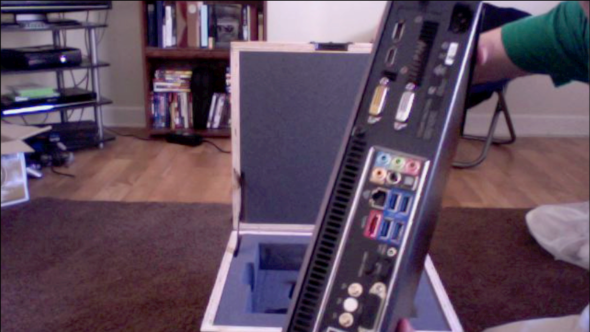 It is here that the Steam Machine makes its biggest leaps and has its biggest downfalls. First off, I want to say that this machine looks nice, if a bit plain. The light around the power button is certainly distinctive enough, but there is not much color to this system. I suppose I cannot fault the casing too much because this is A) just a prototype and B) not indicative of all Steam Machines at all.[1] Still, it could do with some more pizazz.

Second off, hooking up the console was easy, if a bit intimidating. Valve included a helpful diagram for navigating through all the different outlets, but I can still see many people not used to PCs being put off by all the different colors and stuff. It is nowhere near a deal breaker, but still noteworthy.

Finally, signing into the system is a bit of a pain and should definitely be looked at before launch. I had some problems with the service actually recognizing my wi-fi (and then sticking with my wi-fi), but the bigger issue is that Steam requires you to sign in every time you start up the machine, which means that you will have to put in your password using the radial menu. If you have a keyboard, that should not be a problem at all, but if you do not (like me, currently), it is kind of annoying to have to use the controller, even though the radial onscreen keyboard is excellent.

This is all compounded by an interface that is not clearly defined and does not lead the user in clearly. There is no tutorial or helpful advice. It just plops the user in with very little defined commands and hopes for the best. Even figuring out what the buttons on the controller do is a struggle.

Speaking of using the controller… 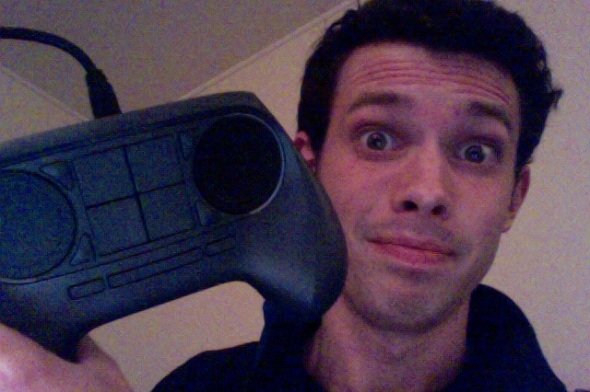 Now that is an odd controller. Instead of analog sticks, this controller has two analog pads that are touch-based. Players can slide their fingers along the pads to move the mouse or move their characters. In addition, each pad can be broken up into four or eight quadrants and used like a set of buttons. So while in a FPS, the right mousepad might be used to aim your character, in a fighting game it might be used to initiate punches and kicks. These buttons are in addition to the other buttons on the controller, including six on the back and four on the front (and another touchpad which is only a set of buttons in the beta).

The controller does not make an excellent first impression. It looks a little strange, feels a bit cheap, and has two analog pads that do not feel incredibly responsive. However, that changes once the controller is actually plugged in.

When the controller is plugged in, the haptic feedback turns on. Now, I am not sure what that means exactly, but in practice it means that I can feel the controller responding to my touch on the analog pads. There seems to be a bit of resistance to my touch, not enough to hinder the movement of my thumb but enough to make it feel like I am actually touching something and not just sliding my thumb to and fro. To give a point of comparison, imagine the difference between scrolling up and down a page using a touchpad and scrolling up and down a page using a mouse wheel. The end result is a touch interface that feels more responsive and tactile than any I have ever used.

With this controller, I have played Super Meat Boy, FTL: Faster Than Light, and Team Fortress 2. I will be honest and say that using this controller did not feel like the best way to play these games. However, it did not feel like a bad way to play them either. FTL is essentially a turn-based game, so there was no gameplay disadvantage. In fact, using the controller was fun as it seemed like I was actually piloting a ship instead of just directing one. And once I got used to the controller, playing Team Fortress 2 or Super Meat Boy was just as fun as playing it any other way.

But that is the key: “once I got used to the controller”. Valve has made some puzzling decisions regarding the interface of the Steam Machine that translate into a difficult time actually getting into the games and playing. There are 13 buttons on the controller, yet only 4 of them are given names. Why Valve did not give the others any signifiers, I do not know, but this translates into difficulty understanding the interface at first, even for someone who has spent a lot of time with Valve’s software. This is compounded by the fact that the incredibly sensitive analog pad buttons often have unnamed functions that are very rarely the functions I want to happen. During gameplay, these pads will often react at what seems to be the slightest of touch.

The controller does have some other limitations. It shoots for mouse-level accuracy but does not quite get there, at least in my early experience. In addition, while the analog pads can be separated into buttons, pressing two separate buttons on the same analog pad (like pressing run+jump) is an iffy experience. It works, but is not as responsive as using two actual buttons.

Like I said before, the controller is not a bad way to play almost any game, though superior alternatives do exist.

So now that I have been through all the interface quirks, how does the Steam Machine actually play? Quite well, actually.

Now my computer is getting on in years, at least for a computer, so it was refreshing to see Team Fortress 2 load up incredibly quickly, but beyond that games play like you would expect. Sadly there does not seem to be a way download games while you play other games (which really should be fixed soon), so I have had to divide up my time between playing games and waiting to play games, but I plan to update this blog with further and more in-depth impressions after playing more.

I also plan on exploring the other areas of SteamOS, the operating system that runs the Steam Machine. I am looking to get a wireless keyboard sometime soon, as without one I am limited in what I can do on there. Again, I will update this blog with what I find.

Beyond that, I am having a really good experience with my Steam machine. It has its quirks, and I do not think the interface is quite ready for mass consumption yet, but I have a lot of faith that it will get there.

So those are my impressions. What did you think? Is the Steam Machine looking like something you would like to buy? Do you want to see me try something out on it? Let me know in the comments below!

__________
1. The actual Steam Machines that people will buy will not all be one model like with the Xbox and Playstation. Rather, “Steam Machine” really refers to a group of PCs built and sold with Valve’s software in mind.
2. It is also worth noting that Steam makes it incredibly easy to tailer the controller to individual games, even if the key-mapping screen ultimately suffers from the same problems as the rest of the interface.
3. For those who are curious, here are the system specs (I’m not sure what is important or not so I’m just listing all that I see):

My brother’s getting married today »
« What if Every Disney Princess Movie Title was a Past Participle?