Non-Apropos Review: Man on the Moon

A good biopic not only presents a dramatic story and character piece, but also encourages the audience to learn more about the person behind the story. Biopics often seem out there and crazy, but while Hollywood does take liberties, the meat of the story, the part that fascinates the audience the most, usually is pretty close to the mark.

And with that I come to Man on the Moon, the biopic of Andy Kaufman starring Jim Carrey currently available on Netflix. I find this movie a difficult movie to recommend but an easy movie to talk about. By that I mean it is not always entertaining, but it is always interesting.

Andy Kaufman, for those not aware, was a person made famous by the TV show Taxi and Saturday Night Live. He did not consider himself a comedian, calling himself more of a “song-and-dance man,” and he was truly unlike any other comedians before him (and after as well). The film details his life in show business, starting with a brief aside to his childhood and then jumping to his standup career and beyond.

Kaufman’s style was about making jokes out of things that did not seem like jokes. Throughout his career he would do pranks for the audience to make fun of him. He would fly off the cuff and say something not okay or do something crazy and ridiculous that looked more appropriate for a lunatic rather than an entertainer. He thought that the audience’s anger and confusion was hilarious, and many times the audience did too.

At one point in the movie, Kaufman talks about how he has to go beyond what the audience was expecting of him, always surprise them and make them second-guess his motives. And the movie plays that like it is his tragic fault as well as his primary strength.

The Kaufman of this film is constantly trying to one-up the audience and surprise them in new ways, but sometimes his surprises are so far ahead of the audience that they just seem like lunacy. At his best, watching Kaufman is like watching a train wreck writhe and straighten itself until it is moving at full speed again. At his worse, Kaufman is like watching a train wreck get hit with another train and then another and then another. 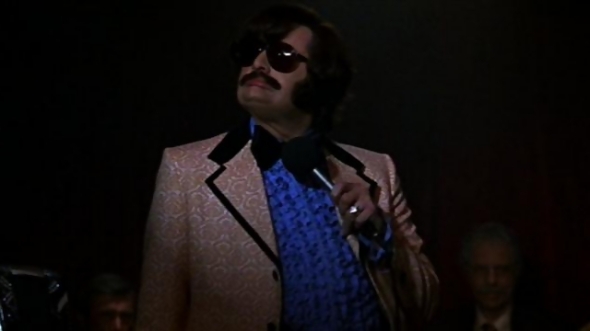 Where a lot of biopics will often idolize their subjects, Man on the Moon paints Kaufman as a man still trying to find himself for much of the movie. Early in the film, we learn to trust that Kaufman will eventually pull through with something entertaining even while we cringe at some of his antics, but Kaufman (and the film) continually test the limits on the audience’s trust. And near the end of the film, the curtain gets pulled back a bit and Kaufman seems to regret this pushing of limits, which makes his character seem that much more flawed.

After viewing this film, I am not sure if I would enjoy watching Kaufman live, but I have to commend his commitment to entertainment even at his own expense. He was willing to be a cultural martyr just so people could laugh at him, and there is something tragically admirable about that.

Have you seen this movie? What did you think? Are you a fan of Kaufman’s? Let me know in the comments below!

What I’m Watching This Fall »
« Some Housekeeping (and Kittens)