Invisible Children, I Know What You Should Raise Awareness for Next!

I don’t normally write about Africa and charities, but today was a special case.

Earlier this year, #Kony2012 went viral. Kony, for those that do not know, is/was a rebel leader in the African country of Uganda who forcibly abducted and trained child soldiers to help his army against the government. These atrocities were absolutely awful and deserving of outrage, which is why I never felt comfortable completely delegitimizing #Kony2012 despite the many criticisms.

#Kony2012 did have many criticisms. Many did not see Kony as a threat, seeing as he had been out of commission for quite a while and quite possibly dead. The LRA had lost their stranglehold over Uganda. And furthermore many believed that capturing Kony, if he was alive, would not do any good anyways.

Some went as far as call Invisible Children a scam, basing their claims partly off their financial reports showing more money going towards awareness more than anything else.

I, personally, found the biggest criticism that could accurately be weighed against Invisible Children was naivety. I realized they believed that if enough people know something is wrong, then change will inevitably happen. However, as far as faults go, being optimistic is a good one to have. So I never really believed that Invisible Children was a scam or that the workers were anything but overtly optimistic. I always thought that they had their heart in the right place.

Now, I feel like we can test that theory.

Another atrocity is happening in Uganda, one actually put through by the Ugandan government, but because the people aren’t the innocent, but rather the outcast, not the pitied, but the disgraced, most people probably haven’t heard of it. They are being put to death for their lifestyle choices, choices that do not affect their neighbors, their friends, or their family in any grossly significant way (at least not significant enough to be put to death). I may be wrong, but I haven’t seen Invisible Children condemn this or raise awareness for this issue. Why not?

That atrocities in question? Here they are: 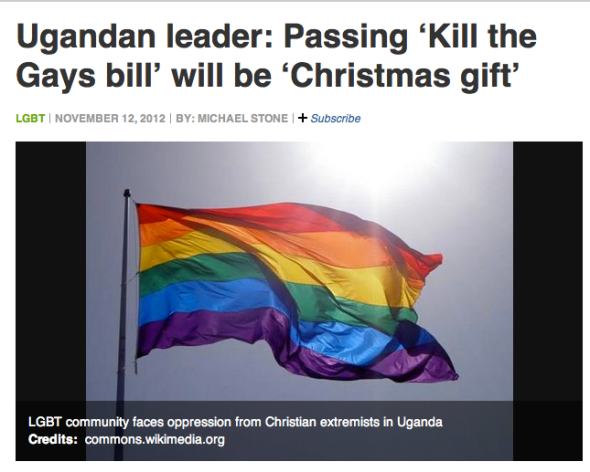 Source Code, and Why We Fight Terrorists »
« Is World War Z Going to be Terrible?