9/11 was, hopefully, the greatest tragedy the United States will ever face in my lifetime. No other attack was as close or as personal as the attack on the Twin Towers using civilian aircraft. That was the day that every person in New York became a martyr, a survivor, or a hero. It left a lasting impression on all of America, prompting people to cry out, even 11 years after the fact, “Never Forget.”

But would it be all that bad to forget?

I mean no disrespect to the people who were killed that day or to the families affected by that event, and I hope that the people who knew these victims are comforted and blessed by their memories in the wake of such a tragedy. But that attack was not aimed at America’s buildings; it was aimed at America’s psyche. It was an attack on America’s sense of comfort and security, telling America that we are not safe and that at any time, we could be killed for no reason other to send a message.

That is a scary thought, and after 9/11, it was more real than ever.

On that day, I was in the 5th grade. My mom took me home early, and I spent the rest of the day playing video games or doing homework. I had no idea how important that day was. Even after hearing about 9/11, I did not understand why my mom took me home. I thought I was safe at school. She told me it was because she felt scared or something like that, but I didn’t really get it.

Now I get it. If the towers could be attacked, why not the schools? How did we know we were safe? Was my house any safer?

9/11 was scary because none of us knew how bad it truly was. Planes stopped flying, people evacuated hot spots, and even shipping halted for a couple of days. We were all afraid that soon the entire nation would be attacked.

But that didn’t happen. Schools continued to run, buildings continued to stand, and planes, eventually, continued to fly. Whether due to Bush, Obama, or some other party, the United States has not received an attack anywhere near that scale since then, and it is my personal belief that we will not for quite some time, hopefully ever.

11 years after 9/11, on its anniversary, a U.S. embassy was attacked by Muslims, killing four people. It was an awful tragedy, born out of hate, but not the type of hate that is instantly apparent. The Muslims attacked the embassy out of outrage at a film called, “The Innocence of Muslims,” which not only featured an actor playing Muhammad, but also clumsily discredited the entire Islam faith. The film was promoted by Terry Jones, the pastor who almost had a widely publicized Qur’an burning. He screened it at his church on the same day.

Hate breeds hate. One attack led to a generation of fear, which led to hate for a wide group of people, which led to another attack.

After the attack on the U.S. embassy, there was a demonstration in honor of the U.S. embassador killed in the attack. It was not started by the friends or family of the deceased, though I have no doubt that they are honoring him in their own ways, but by the Muslims in Libya. In misspelled English, they tried to honor him and show respect for his passing and the others killed. They tried to show that they are not all bad people. 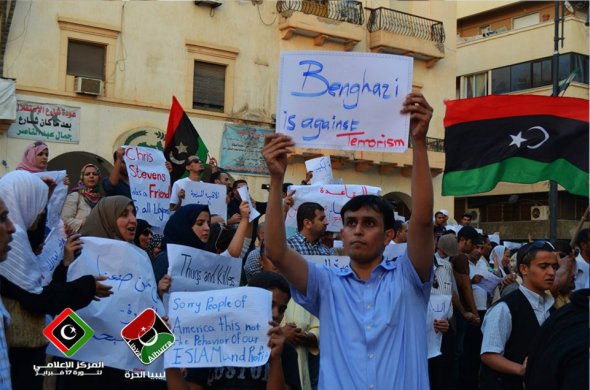 Years from now, I probably will tell my children about 9/11, the horror I experienced then and the tragedy that happened afterward. If they ask who caused that, I’ll simply respond, “Some bad people.” I will never cease to be glad that they do not have to experience that day, and if my children have no tales of horror, of dramatic and sudden stories of pain and loss, of emotional destruction on a national scale, I would be okay with that.

Movies You Should Keep Your Eye on: Wreck-It Ralph »
« The Avengers and The Dark Knight Series: Femme Fatales